My month-long break from work is ending, during which I enjoyed being a full-time trail runner. As I look back, I would like to share why I love trail running. But I think pictures explain it far better than words. The following photos are all from my runs this summer. 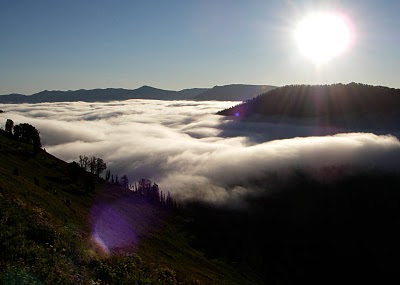 View from mile 4 of my recent race, near Afton, WY 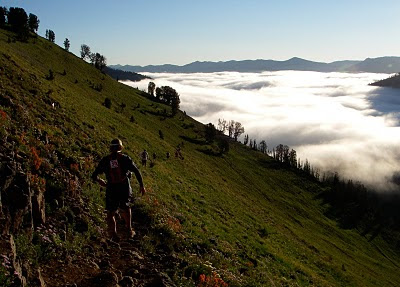 Descending into the clouds. Same location as above photo. 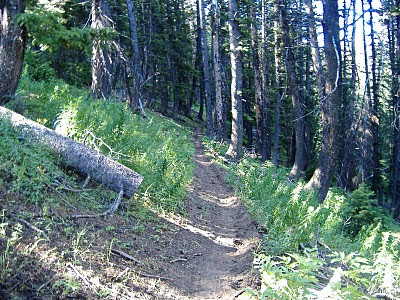 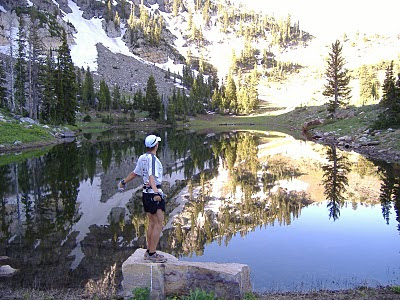 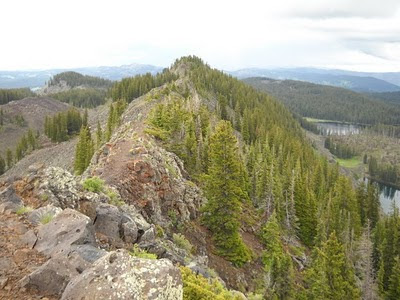 View from Crags Crest on the Grand Mesa, CO, as seen at mile 6 of a recent race. The trail runs along the ridge top. 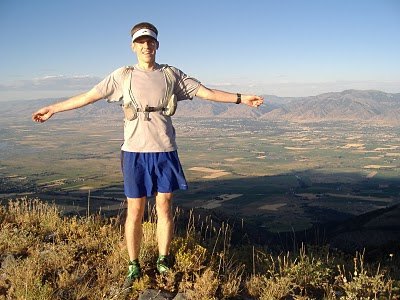 Cache Valley 4000 feet below me, as seen from the Wellsville Mountains
Posted by Jon Allen at 10:34 PM No comments: 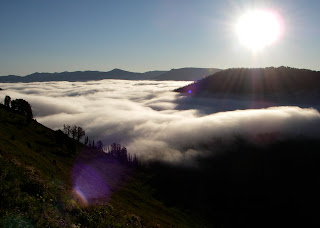 Today was El Vaquero Loco, a wonderful race put on by Ty Draney in the Salt River Mountains near Afton, WY. The course is an out-and-back, starting at 7000 ft, climbing to above 10,000, then down, back up to 10,000, then all the way down to 7000 ft again before turning around and running the whole thing backwards. 9000 ft climbing, equal descending. A 25k race starts at the turnaround 150 min after the 50k starts.

I was rather apprehensive going into the race- my legs were in great shape, but my right foot starting tweaking last week and turned into what feels like a bad case of Plantar Fasciitis. I was worried enough that I didn't run other than Monday, with lots of massage and ice. I almost didn't go to the race, and honestly thought I had a 20% chance of finishing and a 40% chance of making it halfway to the turnaround. I was very pessimistic.

Cody brought his tent, so we crashed there together. The morning was chilly, but I went with just shirt and green shorts- wished I had some gloves at first, but my fingers were only numb for a few minutes. Luke Nelson was the only fast guy we knew at the race- he set the course record of 5:24 last year. I had worked out splits to match that time- I figured I would race hard until my foot forced me to quit. Luke took off right from the gun and was out of sight within a mile. The chase pack was Cody, Micah Rush, and me, with a fair gap behind us.

The trail climbs 2800 feet in 3.7 miles from the start, and I felt strong the whole way. My forced taper had really given my legs some recovery and energy. We reached the top and then descended into a gorgeous glacial valley. The tops of the mountains were visible, but there was dense fog 500 ft below us, which we soon entered. It was one of the prettiest things I have ever seen- amazing. Visibility in the fog was often only 30-50 m. Lots of fun. The trail descends, then climbs to a pair of gorgeous glacial cirque lakes, with a nasty, steep climb back up to 10,000 ft. The lakes were fog-shrouded, but the rocky cliffs just above them were clear, creating a very beautiful and peaceful scene. [I was serious enough about the race that, for the first time in 3 weeks, I didn't carry my camera on a run. But here are a few photos someone else took showing the fog and flowers]. 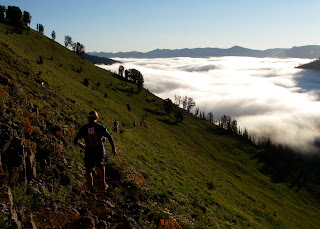 We were on schedule through mile 8, which is followed by a generally-runnable 7 mile downhill (sometimes steep, sometimes overgrown, but overall very enjoyable). I had to stop for a 2 min pit stop/shoe tie, which allowed Micah and Cody to pull away. I soon caught and passed Cody, then ran into the 25k runners who had just started coming the other way. I navigated around all of them just to hit the turnaround and worked my way back up. But the runners were all great at letting me by. First 15 miles were in about 2:40, just 2 min behind goal pace.

Luke was 14 min ahead of me at the halfway. Micah was 2 min up, but I caught and passed him within a few miles. Cody was 1 min back. I felt very good for most of the 7 mile, 3000+ ft climb back up, running all the first 5 miles, then started feeling a bit lightheaded and tired so powerhiked the steeper stuff at the top. I enjoyed having all the 25k-ers to chase all the way up. 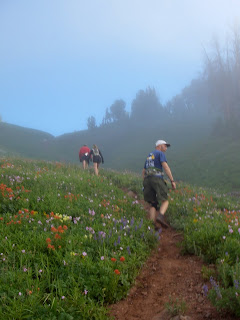 The fog had burned off by the time I reached the top, so I enjoyed the sweeping views in the mountains- Ty sure chose a fantastic, picturesque course. The middle section went very quickly as I concentrated on running hard. My legs and body felt great, though both (?) feet hurt. I reached the final climb, a real grunt, to learn Luke was 20 min up. I saw Cody about 5-6 min back with 4.5 miles to go. He beat me by 5:56 at Logan Peak, so I needed to beat him by more than that today to win our challenge. I walked all of the last climb, figuring it was too steep to make it worth running. Then I hit the downhill and turned on the burners. I was going to make Cody earn his race series win.

Thanks to the taper, my legs felt good on a downhill for the first time in a few months. I pushed hard. The 3.7 miles seemed to last forever, but I enjoyed it. My legs felt great, and I was limited only by the technicality of the trail. I caught a few more 25k-ers on the section, including the lead woman. I finally reached the last .25 mile on the road and sprinted hard. I got a bit confused at the end and followed a car the wrong way, which added a few seconds. Finished in 2nd place with a time of 5:33:32, then anxiously waited to see where Cody was. He appeared 5 minutes later, finishing about 5.5 minutes behind me. We raced 58 miles, and he beat me by 5 seconds total between the races combined! Wow.

Luke won in 5:12, a new course record. Micah finished in 4th, about 30 min behind me. My time is the 3rd fastest ever on this course, and fastest non-Luke time. We all enjoyed a few dips in a nearby lake to help the legs, and partook of burgers and fruit. Great finisher's spread. And I was excited to learn that Ty (2008 Bear 100 winner) and Evan Honeyfield will both be racing the Bear- lots of good competition! Also talked to Leland, the Bear RD who placed 5th today, about the Bear, and chatted with FRB-er Bryce for a while.

I was pleased how good my body felt, and how I was able to run through my foot pain. I hope I didn't cause any severe damage that will limit my Bear training. I felt strong climbing and descending, and never felt too tired. I could have kept running today for many more miles at the same pace. I definitely didn't push on some of the uphills as hard as I could have out of caution for my feet (walking is much easier on PF/arches than running uphill), which ended up being the difference that allowed Cody to win our series. But he won fair-and-square, and deserved it. Congrats.

I'm hoping my feet are well enough to let me do a few more trail runs in Logan next week. Then I fly to South Carolina next Sunday, with 5 final weeks of low-altitude training before flying back to Utah for the Bear. I'm already looking forward to it!