The Foothills Trail traverses the Cherokee Foothills of the Southern Appalachians in North and South Carolina over some of the most rugged terrain in the SE.  It reaches the highest point in South Carolina, crosses numerous rivers and streams alongside dozens of waterfalls, has suspension bridges up to 50 yards long, and can claim such notable landmarks as the Chattooga River (filming location of Deliverance) and Whitewater Falls, the highest waterfall in the East.  The trail is 76 miles long, more or less, with approximately 16,500 ft climbing and 15,900 ft descending, though the exact amounts have been the subject of much discussion on the FHT listserv.  One unique challenge is the thousands and thousands of wooden stairs, which tend to change fast downhills into slow, careful descents.  The crux of the trail is the remote 33 mile Laurel Valley portion that does not have any road crossings or opportunities for aid and is the cause of most DNF’s for the trail.  There entire trail has only been run 16 times in under 30 hours, with twice as many DNF’s.  It is a worthy challenge for any ultra runner. 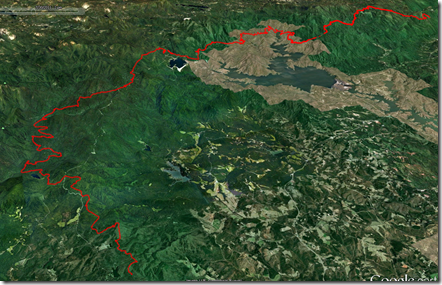 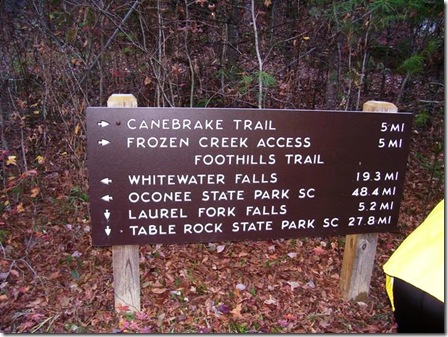 I first learned of the FHT when I ran the Dan Hartley-organized, unofficial Bad Creek 50k on the course last spring.  Over the course of the year, I ran the entire trail in portions.  Thanksgiving week worked well for my first attempt as we were off work and my father would be in town.  My primary goal was to finish, with a secondary goal of breaking Matt Kirk’s Fastest Known Time of 16:52 (I made pace charts for 15:15, 16:30, and 18:15).  My Dad and I left home just after 5 am on Nov 21, reaching the entrance to Table Rock state park at 6 am.  I had to run in about a mile to the trailhead, where I started at 6:22 am.  It had been raining the night before (more on this later) but the weather was warm and humid, near record highs- low of 55, high of 76- T-shirt weather the whole time with lots of sweating.  The steep climb to Sassafras went well as I ran easy, stopping to enjoy the gorgeous sunrise from Bald Knob overlook, with low-lying fog enveloping the blue mountains.  The trail was leaf-covered the entire 76 miles, which made seeing the rocks, roots, and stairs challenging, and water on the leaves soon had my shoes soaking wet.  I reached the Sassafras aid ahead of schedule (2 hr 7 min, including aid stop), swapped bottles, and ran the next leg to Rocky Bottom at mile 14.5 (52 min) where Barry was waiting to pace me. 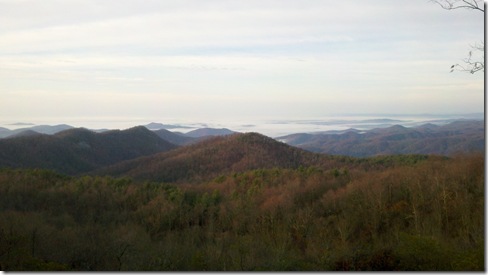 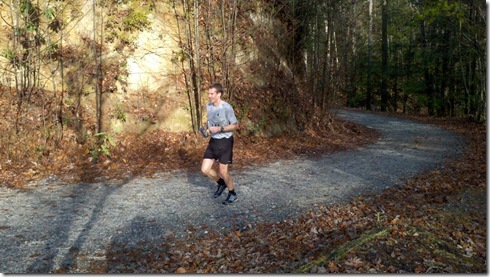 The 33 mile Laurel Valley section with Barry was enjoyable.  It is a long, long section with a wide variety of terrain and numerous climbs and descents.  I tried to maintain a steady pace, but we found that the wet wooden stairs and bridges were extremely slippery and reduced us to slow, slow, cautious sidestepping down the (literally) thousands of steps.  I would estimate that the slick stairs and bridges slowed us 30+ min over this section alone.  We saw very few people, enjoying the hours of solitude.  Long stretches would pass with neither of us wanting to break the silence.  We filtered water once, but carried the rest of the supplies for the entire leg.  We both went through some ups and downs, but steadily moved onwards while trying not to think about how far we still had to go.  Highlights included a refreshing thundershower, amazing views, not too many spiderwebs, and seeing a pack of 10 wild boars.  Good times.  The last mile to the WWF aid is perhaps the hardest of the run, with some boulder scrambling, a steep climb, and a very technical traverse.  We reached an anxiously-waiting Dad and Justin, where I changed shoes and clothes and swapped gear.  Counting the stop, the leg was 7 hrs 53 min, an hour slower than Matt’s FKT split.  I knew the record was out of reach so stopped worrying about the time.  I knew I would finish, so just kept moving forward, knowing we would reach the finish which we reached it.  Quitting was never an option. 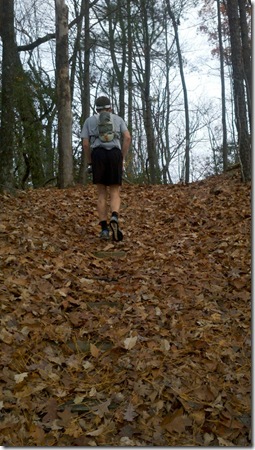 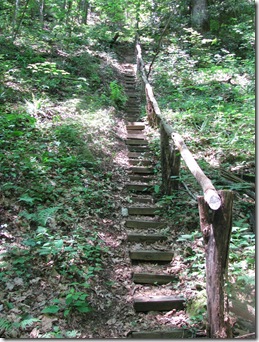 Stairs hidden under the leaves

Justin paced me from Whitewater Falls to Sloan Bridge as the sun set.  The darkness combined with the leaf-strewn trail and my fatigue to slow the pace more than anticipated, but we reached the aid in 69 min.  Then followed the Fish Hatchery and Burrell’s Ford sections, taking 48 and 61 min, respectively.  I can’t recall many specifics other than being wrapped in the small cone of light on a never ending trail with Justin, and slowing to a walk for almost every obstacle or semi-technical trail portion.  Justin asked once if I thought I would get a second wind and run faster, which I found humorous since I was actually feeling good and felt like I was running fast at that time.  Justin learned just how far every mile can be running at night over technical terrain while tired.  My dad met us at Burrell’s Ford (mile 60.1) for a refill before the long Chattooga River section.  The first half was slow, as the technical trail generally follows (and briefly enters) the river, but we began to have faster stretches when the trail would smooth out.  We were cruising up a long uphill when a headlamp was coming the other way- it was Ken, running to find us after hours of waiting.  The 3 of us ran the last miles to Cheohee and the final aid after a (slightly) faster than expected sub-2:45, 10.4 mile stretch.  Justin bowed out at this point while my Dad joined in for his first-ever night trail run.  The last 6 miles went fast, even if we weren’t on the long uphills.  There were some nice views of the lights in the distance (one benefit of running after the leaves have fallen) with lots of jovial chatting.  The finishing trailhead in Oconee State Park soon arrived after 1:16 for the last stretch.  It was 12:16 am, for a final time of 17 hrs 54 min, the second fastest FHT time ever.  We were finished.  After jogging the 1 mile road out of the park, we met Justin at the car.  With congrats and photos all around, my Dad drove everyone back to their cars while we enjoyed the donuts and chocolate milk my Dad had wisely bought, finally arriving home at 3 am. 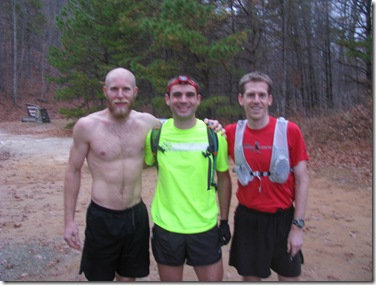 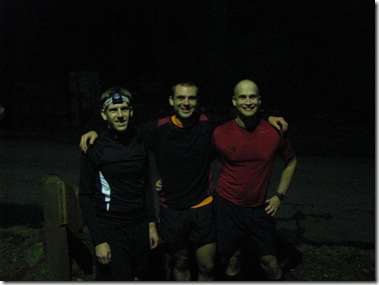 I really enjoyed running the entire FHT.  It is an awesome trail and I had great company along the way.  Thanks again to my great crew and family- I couldn’t have done it without you guys.  Justin asked if I thought it was as hard as a 100 mile race, as some have said.  Personally, I don’t think it is.  For me, nothing compares to the last 20-30 of a 100, and I would say this stopped just as I was physically reaching that point.  It was no tougher for me than the first 75 miles of the Bear 100, for example, and not as hard as the entire Rocky Raccoon 100.  But it’s still a tough trail and all finishers should be proud of their accomplishment.

One final thought- running the FHT is a big undertaking requiring lots of planning and support.  If I ever run the trail again, I would again go for the record, which I think is doable.  Here are a few items I think would help, some pertinent to me and some to everyone:

Given this admittedly-ideal scenario, I think a sub-15 hr time is possible by me or someone else.  Since I am running Umstead 100 next March, my next attempt is likely at least 16 months away.  In the meantime, good luck to all other FHT runners and have fun!  Go add your name to the finisher’s list!