The Generosity of a Runner (aka Dale is awesome, aka Logan Peak race report)

I’ve been a complete slacker in my blogging ever since Umstead in March.  Life has been busy- between a wife, 3 kids, another on the way, a mortgage, full-time job, running, and church, I haven’t had time to both run and write about running.  Not that there hasn’t been a lot to write about- pacing for 12 hours at Hardrock, DNS at Waldo, 3rd place finishes at Iron Mountain 50 and Shut In Ridge Run, and especially winning the StumpJump 50k where Max King was entered (not every day you can say that).  But, I haven’t wanted to write about any of those until I first told the story of Logan Peak Run.  But the story isn’t about the race itself; instead, it’s about something better- the goodness and generosity of people, especially runners.

Logan Peak Run in 2008 was my first ultramarathon, and I ran it 3 years in a row while I lived in Logan, winning twice.  It’s a great race on a beautiful course and is a wonderful opportunity to run hard with my friends, though I never expected to again run the race after moving to South Carolina in 2010.  But again, this story isn’t about the race.

Marci and the kids were flying to Idaho to see her family in early June, with me joining a few weeks later.  I soon realized that I would be flying into Salt Lake the day of the Logan Peak run.  I rearranged my schedule just so I could arrive a day earlier, enabling me to see my Logan friends (Cody, Joe, et al) and run the race.  It would be a grand homecoming reunion.

I awoke early that  Friday morning in South Carolina, eager to fly to Utah to see my family and friends.  However, I received a message from Southwest Airlines during my drive that my flight had been cancelled.  Knowing there were flights later in the day but finding that the Southwest 1-800 number had a 2 hour hold time (!), I continued to the airport.  I arrived to chaos.  Apparently a glitch at the Chicago airport the evening before had prevented almost 100 Southwest airplanes from taking off, including my flight.  I stood in line for 90 minutes to talk to an agent, who informed me that the earliest rebooking would see me arrive in Utah late Saturday night.  I was pretty bummed out that I would miss the race and not see my wife and kids for another day.  I even looked online for flights on other airlines, but found the last-minute tickets were well above my income bracket.  I consoled myself with breakfast at the Southern staple, Waffle House, and vented a bit on facebook and the Fast Running Blog before returning home.  I was already planning a monster trail run the next morning to pound out my aggression, disregarding the ALL-TIME record high temperatures in Greenville that day.

And then, it happened.  Unexpectedly, I received an email from Dale.  I have never met Dale, but he is a runner on the Fast Running Blog who lives near Seattle and is a friend of a friend, having run a Ragnar Relay with Cody a few years prior.  Dale’s email was brief, simply stating that he heard about my situation and wanted to help by donating some frequent flyer miles to get me to Utah that day.  I wrote a quick, “Thanks for the offer, but I really can’t” email, but he immediately reiterated his offer and sent me his phone number to talk.  He included a little snippet that he hated to see a runner miss a race, plus wanted someone to beat Cody.  Still hesitant, I called Dale and was overwhelmed by his insistence.  He had already confirmed that he had enough frequent flier miles to buy me the ticket and had even looked up what time the flight would arrive (11:47 pm) and it’s on-time arrival record.  I told him I would call my wife and let him know.

Marci was understandably shocked when I told her about Dale’s offer.  I still was very reticent to use his miles, but Marci told me that either I took Dale’s offer, arrived very late Friday night, would be able to run the race, and then we would make it to Idaho in time for her family reunion, or I would decline the offer, arrive very late Saturday night, and would miss both the race and family reunion.  I called Dale, expressed my gratitude multiple times, and gave him the info to buy my ticket.  30 minutes later, I was headed back to the airport, ticket in hand.  Good thing I didn’t unpack.  Before I left, I renamed my blog, “Dale is Awesome!!!”  He really is. 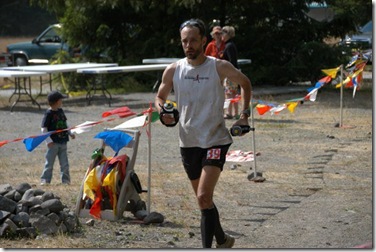 I had Dale book me on an early flight from Greenville to Atlanta, giving me a 4 hour layover before the flight to Salt Lake City.  I was hoping seats on an earlier flight might open up.  As soon as I got to the gate in Greenville, I asked the attendant if there were any openings.  While she looked, I started recounting my adventure that day, including telling how my wife (with 3 kids in tow) was picking me up at the airport at midnight, 14 hours later than originally planned.  Although she first said there were no openings, the attendant humored me by putting me on standby for an earlier flight.  Then, she noticed that I was a medallion member (something I had fortuitously received earlier that very week as a perk from work).  I asked if that made a difference, and she said it certainly did.  5 minutes later, I found myself with a ticket in-hand for the earlier flight.  10 minutes after that, she replaced that ticket with an aisle seat on the earlier flight.  Things could not have worked out better.

That is how, at 10 pm MDT that night, I found myself hoping into a car with my wife in Utah.  Thanks to some road construction, we arrived in Logan at 1 am, 22 hours after I woke up, where I managed to sleep for only a few hours before it was time for the race.

Needless to say, the race is almost an afterthought in this story.  After all, unexpected acts of charity and generosity are far more important that a bunch of skinny guys in short shorts running around a mountain.  But since this is a race report, I better include something.  Cody gave me a ride to the race, and it was great to see him and many other friends at the starting line.  I almost froze to death in the 50 deg temps waiting for the race to start, as I hadn’t experienced weather colder than 60 deg in at least 3 months and was used to 75 or 80 deg lows.  I felt tired and out of breath (gee, I wonder why) on the initial, 3500 ft climb, which allowed a couple packs to pull ahead of me.  I didn’t care- I was just happy to be there, enjoying a gorgeous day in my beloved former stomping grounds of Northern Utah mountains.  I found my lungs after an hour and caught the second group (including Joe and Cody) before aid 2.  We chatted some, then Joe and I slowly pulled away on the climb to Logan Peak, summiting together with only Seth Wold ahead of us. 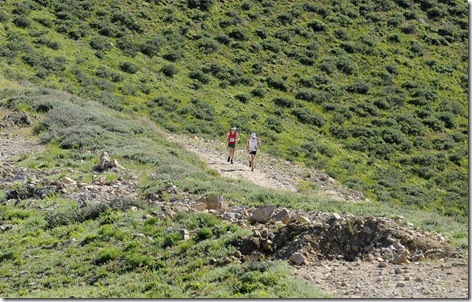 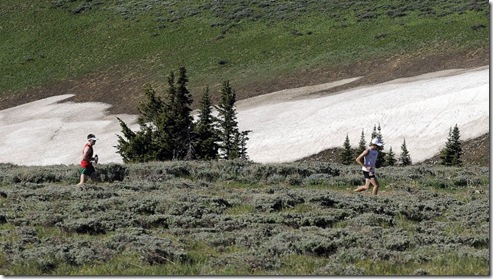 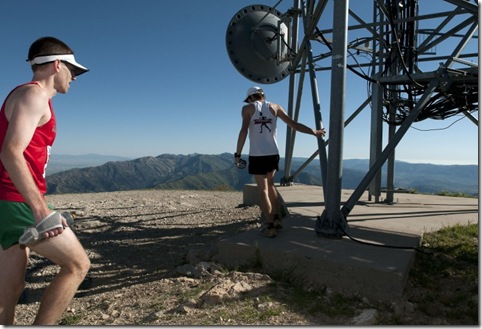 Joe and I approaching the summit of Logan Peak (pics from Eli Lucero, Herald Journal News)

Joe and I paused briefly to enjoy the amazing view of the Bear River Range and Cache Valley.  Then, game on- Joe pulled slowly away on the descent, leaving me in 3rd place.  I pushed hard over the next hour on the rolling North Syncline trail, straining for glimpses of Joe before finally catching him around mile 22, hiking through the mule ears.  Joe thwarted every passing attempt with (un)timely surges before leaving me in his dust at the last aid station.  My quads held up well going down Dry Canyon but I never saw Joe again.  Seth won in just over 4 hours, followed by Joe, me, and Cody, all under Cody’s old CR (though a new path to the summit took off a few minutes).  The food and fraternizing at the finish line were splendid, and I even told the local sports writer about Dale and the donated ticket, which he duly included in his write up. 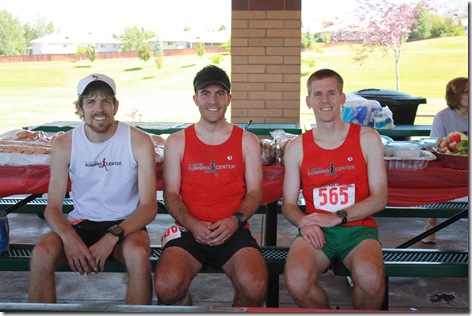 Joe, Cody, and I after the race

Marci was eager to see her family, so we soon left and drove the Idaho.  I was riding high after a fun race and looking forward to a few good weeks of trail running and pacing at Hardrock.  But I will forever be mindful and grateful to Dale, who truly renewed my faith in humanity and did a good deed just to help someone else.  Dale, and runners everywhere, truly are awesome.  Dale, thank you again.  I’ll do my best to go and do likewise to my fellow men.