Ever since moving to South Carolina three years ago, runners have barraged me with tales of Terri Hayes’ great races.  She puts on a handful of no-entry-fee races in South Carolina and Florida every year that are well organized and on beautiful courses, although most were no-go for me as they are on Sunday.  Last year, though, she added a Saturday running of the Chattooga River 50k, so I dutifully added it to my list for this year.

Chattooga is as fine of a race course as you’ll find anywhere.  It is 100% beautiful singletrack, some technical, and always hilly with 5100 ft climb and 5100 ft descent, though the single biggest climb is only 1100 ft.  19 miles of it is along the famed Foothills Trail that I had previously run.  It is not an easy race; it only has 3 aid stations, and is run in the hot and humid summer climate, with winning times as slow as 5:30.  Only 3 guys had ever broken 5 hrs, with an impressive CR of 4:32 by Sean Dunlap.  Jason Flassing and I ran the entire course the week before the race as an a nice training run, which ensured there would be no race day course surprises.  This was my first local race as a member of Team PI, so I was proud to be sporting the team race colors.  I’ve been wearing Pearl Izumi gear for a long time, especially the shoes, but toeing the line as a sponsored runner for Team Pearl Izumi Ultra was an added bonus.

I left home at 4:40 am to get Jason for the 90 minute drive.  Unlike the previous week when it was warm and very rainy, we arrived at the start to find it an unseasonably-cool 45 deg.  Perfect.  We met the spry and energetic Terri Hayes, who doesn’t look anything near as old as he claimed 70 years old nor as worn as you would expect after almost 300 ultras.  What a legend.  After the usual pre-race preparations and catching up with friends, Terri lined us up and, ignoring a honking pickup truck bringing the very-late runner Viktor, started us on the adventure.  One tall runner started off quickly, with the rest of us tagging behind.  I passed him as he made a slight detour and led the charge 1100 feet down Winding Stairs trail, over creeks and through switchbacks.  The lead runner in SE trail runs has the privilege of finding all the spider webs across the trail, but there were relatively few this day perhaps due to the cool temps.  I hit the end of Winding Stairs 3.25 miles later in about 24 minutes and took a pit stop while Jason and the tall runner took the lead.  I slowly caught up and passed Jason while seeing all the runners still coming down the narrow trail, though the tall runner had put in a good surge and taken a 30 second lead that I was in no hurry to match.  We climbed all the way back up, reaching the first aid at 6.5 miles in 55 minutes.  I asked the volunteers if the runner ahead was Sean Dunlap, but they said his name was Eric Bohac. 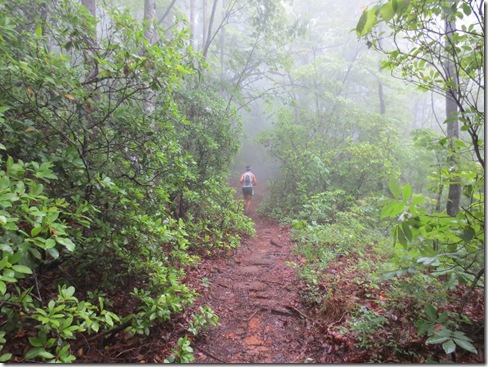 Winding Stairs trail (all pictures taken one week prior to race)

After aid 1, the course turns onto the rolling hills of Big Bend trail, slowly descending to and then running near the Chattooga River, filming location of the classic movie Deliverance.  The trail seems to climb and descend the hills bordering the river far more than it actually runs along the river, though, but it’s some nice scenery.  I caught Eric a few miles after aid 1 and tried to make small talk, though he was brief in his responses.  His running struck me as rather uneven effort-wise, sometimes charging hard up steep hills before abruptly slowing to a walk.  He was also carrying 1 bottle versus my 2, and I didn’t see him taking any gu’s.  I loosely trailed him for a while, wondering if I’d see the large husky dog that tagged along with Jason and I the week before, while content to relax and save energy.  At 11.5 miles, Eric abruptly slowed to a walk on a runnable uphill and I passed him.  I enjoyed the solo run for the next 5 miles through some wonderful trails.  I was comfortable despite the rising temperature, actively listening to the sounds of nature, especially the songbirds.  I pulled into aid 2 at mile 16.1 in 2:26, about 7 min ahead of my 4:50 planned finish.  2012 winner Ryan Thompson encouraged me while Terri commented that I was either running very fast or cheating!  I dropped my Nathan vest and second bottle and hurried the additional 2 miles towards the turnaround.  The 2.25 downhill miles passed quickly and I his the 18.3 mile turnaround at 2:45.  Later runners would report a large black bear lingering near the turnaround bridge, but I didn’t see him (I am still waiting to see my first east coast bear). 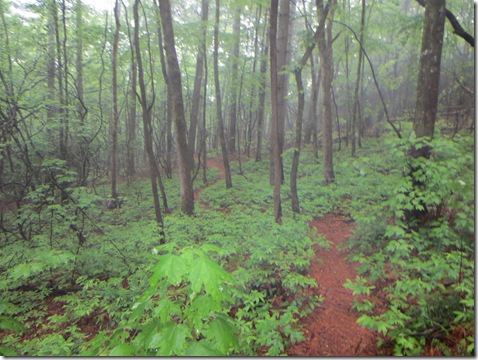 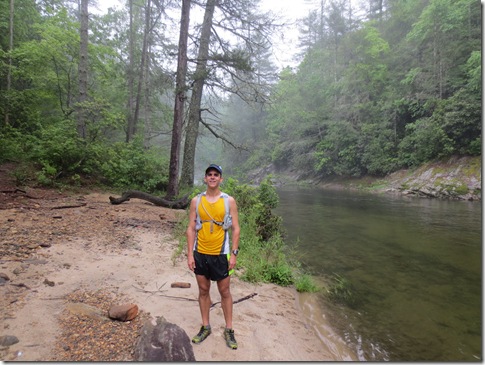 Jason and the Chattooga River

I timed myself after the turnaround and was happy to see Jason the first runner behind me, about 4 min back, followed another 4 min later by a group including Merle Glick, Byron Backer, and Eric.  I had hoped my lead would be larger, but some added motivation/competition is always a plus.  I hit the third and final aid station at mile 20.5 three minutes ahead of schedule at 3:08 and took my longest stop of the day, ~90 seconds.  I had to find my pack, plus wanted to get in a few extra calories before the long haul to the finish.  Some coke and gummy bears hit the spot and I returned towards the river, still seeing a steady stream of happy runners on the outbound leg.  The first few miles went very well, but I found myself facing the pain and fatigue common to any ultra.  No longer noticing the natural beauty around me, I pressed onwards, though my previously steady run was now interspersed with a few uphill walks.  I hit a particularly low patch around 4 hours.  I told myself that if no one caught me, it wouldn’t be because I wasn’t giving them a chance with my slow pace (I averaged about 75 seconds slower per mile on the 10 mile return trip than earlier in the race, which isn’t terrible but certainly not ideal).  The grind continued, up and down near the river.  I took another gu around 4:30 and almost immediately started feeling markedly better. 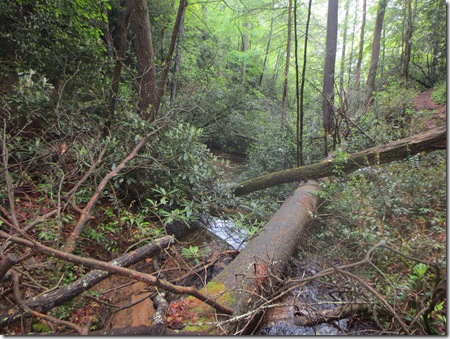 With renewed vigor, I ran most of the uphill on the Big Bend trail.  The last 2 miles are rolling with lots of downhill, and I was still able to get some good leg turnover.  I could never see more than 30 seconds behind me, but finally felt confident that I would hold the lead.  And I had a good goal, too- sub 5 hrs.  It had seemed doable for most of the race, but my 60 minutes of slowness put it in doubt for a while.  But the final road crossing finally led to the last half mile of trail, finishing in 4:58:26.  I was only the 4th guy ever to break 5 hours, which was nice despite my mid-race struggles.  Jason finished 5 minutes behind, Merle 20 minutes further back, and then the rest spread out from there.  Terri hosts the same race again on Sunday, with the winning time of 5:11, so I was fastest of the weekend.  7 of the runners even completed the race both days- that’s plumb crazy.

The finish area was enjoyable, with potato soup, sloppy joes, chocolate milk, chips, candy, etc.  Jason and I spent several hours fraternizing with all the wonderful people there.  What a friendly group of people, none more so than Terri.  I was quite sore and tired upon finishing, but felt remarkably better by the time we left.  It was a wonderful, enjoyable, beautiful race with such nice people.  Hard to beat a day like that.

I wore the Pearl Izumi Trail M2 shoes and they were great, with sufficient traction for the slick roots and protection for the rocks.  The Ultra Split Short has two huge, no-bounce gel flask pockets for lots of gu storage, plus another large zipper pocket for tp or other essentials.  I’m a packrat, and they work and feel great for me.  And the Infinity In-R-Cool singlet is as lightweight and comfortable as any shirt out there.  Throw in two Nathan QuickDraw Elite bottles and a Nathan HPL 028 vest, and that was my whole ensemble.