Pinhoti 100 mile race report (aka The Power of Bacon)

Better late than never, right? Compared to my other hundo race reports, this one should be shorter and sweeter, mainly a compilation of thoughts on the race itself and my performance. Here we go:

Pinhoti means “Turkey Home.” Not sure what that has to do with anything, but there you go. The Pinhoti 100, on the other hand, is a trail race in eastern Alabama. It’s only been around for 6 years but has a reputation as a well-run race over a beautiful course.

They say you can’t start a 100 too slow. This is false. An early bathroom break found me at the back of a 10 person conga line moving uncomfortably slow. I forced myself to be patient, but lost 12 minutes from my goal time in the first 6 miles. I started too slow.

I talked to John Dove, one of three finishers of all Pinhotis, after aid 1. He told me the race is very runnable after mile 55, so save legs for that. He said mile 55 aid would be half of finishing time, and said the real key is running every step up Pinnacle Mtn. Both proved false- my splits were 9:51/8:22, and Pinnacle has some walking parts.

Several of the aid stations had music playing, all of them songs I liked. I enjoyed having those songs in my head. These included Zac Brown Band and Van Halen.

Pinhoti claims to be 80% singletrack. This is overly generous, I think, counting some jeep/fire road and double track as singletrack. There was more road than expected, though I didn’t mind at the end when it allows for fast running. There were several gravel road sections where a bike sure would have been nice. But overall I’d call it a good course, even if it really isn’t 80% singletrack.

The aid stations are well supplied with helpful volunteers. Thanks, all.

I’m not a fan of Hammer gels and can’t really stomach any flavors other than Montana Huckleberry. Orange, apple cinnamon, and tropical are ok. I can’t stand raspberry or banana. I think I ate 40 Huckleberry and never got sick of them.

Great views from Bald Rock at mile 40 aid station. And Blue Hell is slow, but a nice break and better than the road miles that follow.

This was my first 100 with no crew or pacers. I really enjoyed doing it that way, being self-sufficient and self-motivated. I plan to do it again in the future. I’m on the Karl Meltzer “no-pacers” bandwagon now.

This was my most even 100 miler ever, with no big ups or down. Truthfully, the first 65 miles were not great and I had accepted that it was not a strong race for me, running generally in ~7th place and feeling decidedly mediocre. But the last 30 miles were the best I’ve ever felt in any section of a hundred, especially the last 20 miles. Not sure how much the second fact is related to the first. The last 20 miles changed the race from “blah” to my best hundred ever.

Climbing Pinnacle Mountain was enjoyable and the first point where I started to feel good. There were literally thousands of spider eyes visible along the side of the trail in this section. The party music booming down from the aid station encouraged me, and I enthusiastically screamed and did a little dance when I arrived, then ate bacon. Delicious. Hard to top that. Powered by bacon, I moved up 4 spots in 10 miles (mile 80 to 90) and ran the fastest closing marathon of all runners.

The trail from mile 75 to 80 felt like a continuous spiral to the left. I’m still not sure how the trail didn’t loop over itself three times.

One race highlight was running with Olaf Wasternack from mile 80-83. It was the longest conversation I had all day and was very enjoyable, speeding the miles along. I was disappointed when he dropped back at mile 83.

It’s fun to pass people and run fast at the end of a race.

I’m ashamed I didn’t greet or acknowledge Pierre Loic Deragne when I passed him in the mile 90 aid station. I was so excited that I was moving into 3rd place that I didn’t encourage him, I just asked how far ahead 2nd place was and stormed out of the aid station. Sorry, Pierre.

I missed a turn at mile 93 and went swimming twice, literally, thinking the course was on the other side of the lake. Eventually backtracked and found the turn. Glad the 5 minute detour didn’t cost me a podium finish. Ru nning scared after the detour can sure add some pep to the legs.

It was fun to sprint across the finish line and still have energy and minimal soreness. I was disappointed there was no food, though (can’t they bring the food from the first aid stations to the finish?), but Kelley Hanna Wells got me some delicious grub from her car that saved me. Can’t thank her enough. Chicken wrap and coke never tasted so good, especially at 1 am.

A typical post-race highlight is hanging out at the finish and talking to all the great runners, including Jason and Evan, the top 2 finishers. It was also enjoyable to hear running-buddy Jason’s adventure of his first hundo.

This race leaves me even hungrier for a 100 mile win. Gotta get me one of those. 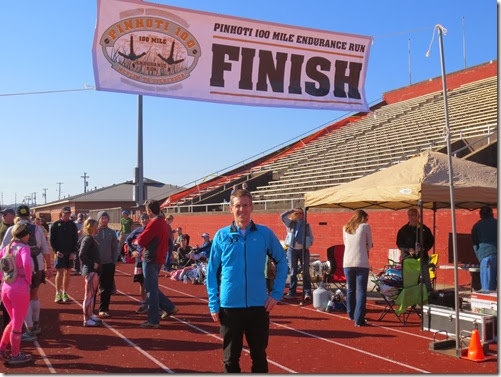