About a month ago, I decided that my last long training run before the Bear would be easier if it were an official race, rather than trying to do a long run on unknown trails by myself. A quick search turned up the Iron Mountain 50-30-16 mile race in Damascus, Virginia, at the very south-western part of Virginia, about 3.5 hours from Greenville. Once I saw the $25 race entry fee, I knew I had found a winner, and chose the 30 mile distance (the 50 seemed a bit long just 3 weeks before the Bear).

The race starts in the quaint town of Damascus and generally runs along the spine of the Iron Mtns, part of the Appalachians. The AT runs along the same path for a bit. This is the 5th year of the 50 mile race, but only the second for the other two. The races tripled in size this year, from ~40 to 110 entrants. The course record for the 30 was 5:07, which seemed very doable. Marci flew into town this weekend and would be my crew at the 4 aid stations. I only carried 1 water bottle with 2 gu's inside, and she would switch me at each aid. I told her I thought I would finish between 4.5-5 hrs. We arrived well after dark and set up our tent at a nearby campground, sleeping only a fitful 4 or 5 hours.

The next morning had beautiful weather. I did a little warmup with 2 stars, then we were off. The first 4.5 miles are on a rail trail, a nice flat gravel path. A Kenyan (who moved to Damascus) and another guy started very fast, so I assumed they were both in the 16 mile. Lew McGrath, 3 time IM 50 runner and 1 time winner, soon caught me. He told me he was in the 30 miler, also, but was running a bit fast for me- I didn't want to do sub-7 miles that early in an ultra. By the first aid (4.25 miles, 35 min), Lew was ~30 seconds ahead, but I made half of that up with the quick bottle exchange from Marci. The next portion was a singletrack climb up to the IM ridge, which I found rather runnable despite the RD saying it was very steep- climbed from 2000 ft to 3600 ft in 3.5 miles. I passed Lew just up the singletrack and pulled away steadily from there. The next 3 miles on the ridge went fast, with lots of relatively short climbs and descents. The trail had portions that were very rocky and rooty, but nothing unrunnable. I saw the first 2 16 mile runners on their return trip, then I was at the aid station at mile 9.2 for another bottle exchange with Marci (1:21 total time). 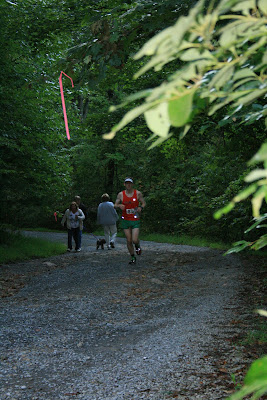 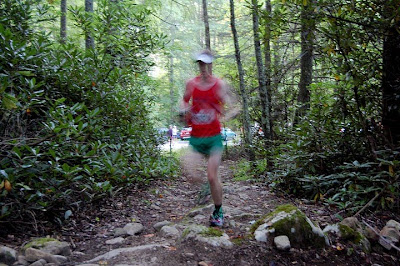 Leaving Aid 1. Apparently I was running very fast despite the rocks, hence the blurry pic.

After aid 2, I was now the lead runner. The trail generally followed the ridge, alternating climbs and descents, never flat. 99% runnable, though still rocky and rooty. There were trees everywhere, so I never had any great vistas. I startled 2 deer from 10 feet, resulting in a yelp from me. I felt good yet reserved on this portion, preparing for the turnaround. I took one pit stop, then reached the turnaround at mile 15.4 in 2:17. Based on my watch, the first runner (a young blonde hair runner) was 3 min behind me, and Lew was 5 min back, followed by a steady stream of runners, with the usual encouragement. I pushed hard on the way back, hitting low-7's on several miles. I didn't want to give anyone a chance to catch me, reaching the last aid station (same location as aid 2) at mile 21.6 at 3:09, a 4 min negative split over 6.2 miles versus outbound. Marci was again waiting, though I noticed the aid station was much quieter than the first time, with only Marci and 3 aid workers. On the way out, there had been several dozen cheering crew members waiting for their runners, as well.

After the last aid, the trail continued backwards from the original route. I passed the singletrack I had climbed several hours before, while the inbound route stayed on the ridge for several more miles. I began picking off the slow 16 milers, who were generally enthusiastic. After a bit of a low patch at mile 22-23 (repeat to self: “It’s supposed to hurt, just keep running”) I reached the final peak at mile 26, where the trail began down paralleling a creek. The next 2 miles were… rocky. Very, very rocky. With lots of stream crossings. I’m not sure how I managed to never trip or get my feet wet, but pushed hard and finally reached the edge of town. My previous effort morphed into a 6 min pace over the flat terrain, back to the starting park. Marci was surprised to see me as I sprinted to the finish line for a finishing time of 4:03:55, 63 min off the old course record. The RD was shocked, first thinking I was a 16 miler, then thinking I turned around early. When I showed him my garmin with the 28.9 total miles, he heartily congratulated me, then invited me to do my Iron Man pushups and situps- whoever does the most situps and pushups within 5 min of finishing wins an award. I declined, instead helping myself to a hamburger and ice cream that was waiting. Yummy. I won a $35 gift certificate to a local outdoor shop, which I promptly used on maps and food. 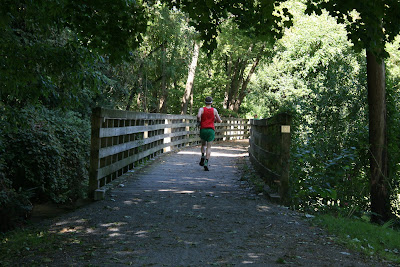 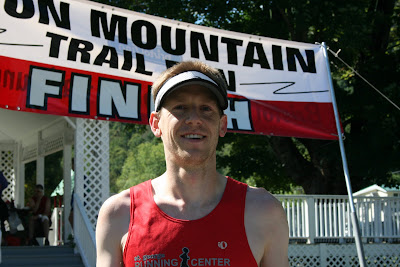 Lew finished second, 40 min back from me. The blonde runner must have been doing the 50 miler. We saw several more finishers over the next hour, cheering them all in, before a quick shower followed by a long drive with my lovely wife through the backwoods of Virginia and a 4 hour drive on the lovely Blue Ridge Parkway before finally returning home at 10:30 pm.

I thought this was a great race- very runnable and enjoyable course, nice people, well marked, perfect weather- really, as good as it gets. I was happy with how I felt and ran, though both my ankles/Achilles are swollen and sore. Lots of ice for those. I averaged 8:53 on the way out and 7:55’s on the way back. I was shocked to see how much vertical there was- 7500 ft according to SportTracks (11,200 per Garmin TC, but we ignore that). More than Logan Peak!!! That surprised me. All in all, though, it was a great last long run for the Bear, including a win and huge course record. Now 1 more week of training and 2 weeks of taper, then the big day!