Another East Coast classic, Uwharrie Mountain run is in its 21st year.  I was running primarily as a good workout for Umstead 100, but was hoping for a win and a finish around 6 hrs.  The race is run as an out-and-back along the white-paint hashed 20-mile Uwharrie Trail in NC.  The course was typical for East Coast runs- leaf strewn, lots of rocks and roots, water crossings, and mud.  The level of technicality ranged from somewhat to rather, which, for some reason, is more than I expected.  But, save a few steep hills, I found all of it runnable, despite what some people had told me pre-race.  The past two years were extremely rainy, but this year was better with low-40’s temps and intermittent rain (never enough to soak my shirt). 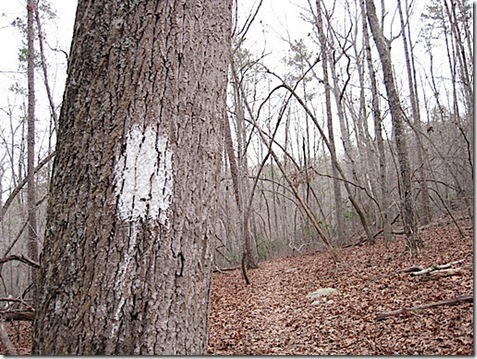 Typical trail and white hash denoting the path [all photos from Scott Lynch’s blog and running-down.com- thanks!]

The race started 20 min late due to shuttle/parking issues, but we were soon off and running.  I found myself in second headed up the rocky conga line climb in the first mile, which we would have to joy of descending 39 miles later on tired legs.  The lead group moved at a brisk pace along the mountain trails with some normal conversation as I got to know local vets Ronnie Weed and Mike Mason.  After an hour, I felt good so passed into first and increased the pace.  Unfortunately, I somehow found myself on the wrong side of a stream, losing a minute until Ronnie came by and set me straight.  Around 2 hrs, my stomach started acting up and my body did not feel good- probably a combination of a fast start and residual fatigue.  I was pretty miserable and just tried to keep moving forward, not particularly enjoying myself.  Ronnie passed me and was 6 minutes ahead at the 20 mile turnaround.  I reached it in 3:01:30, about 5 minutes behind schedule (which wasn’t too bad considering how I felt for the last hour) 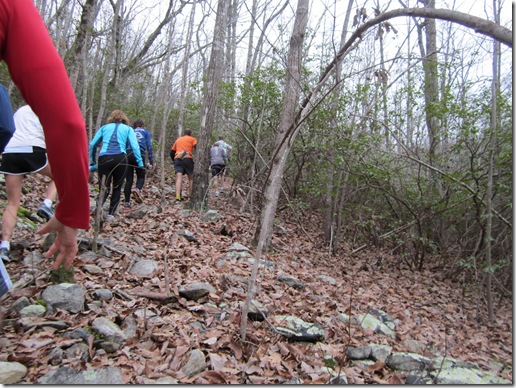 The first climb, and the last descent, as seen by Scott

Right after the turnaround, I caught a toe and did a superman dive into some lovely mud, leaving my entire right side coated and my leg/knee with a sweet blood streak down them for the remainder of the race.  As I slowly picked myself and my ego up, Mike Mason flew by, looking extremely strong.  Still moving slowly, I soon found the myself having the share the singletrack with the outbound 20 and 40 mile runners, though almost all of them yielded to allow me past.  Almost puking numerous times, I hardly had the energy to do more than wave to their enthusiastic greetings while navigating the most technical part of the course amidst an increasing rain. 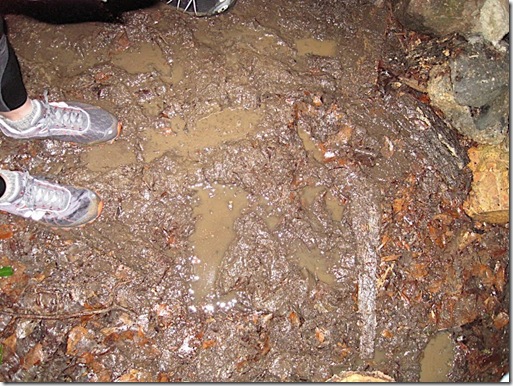 Uwharrie mud, found throughout the course- it makes for a soft landing 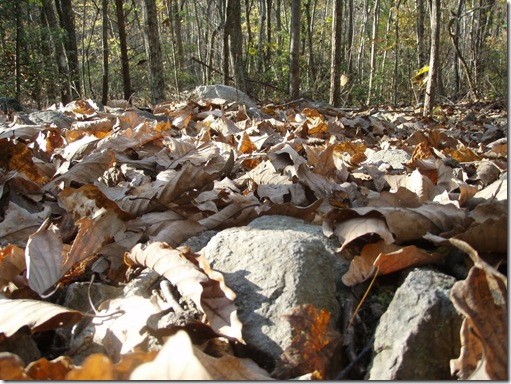 I was not alone in my despondency, though, as I passed Ronnie 30 minutes later as he slowly walked down a hill.  Reaching the 23 mile aid station, I downed 2 glasses of coke, which seemed to hit the spot- my stomach started feeling much better and my energy level soon returned, aided by many more glasses of coke the rest of the way.  By 4 hrs, I felt my normal self and pushed forward, giving my best to catch Mike who was between 2-8 minutes ahead, depending on whom you asked.  Feet soaked, I splashed through all the streams and mud bogs that I had gingerly picked my way through 2 hrs previous.  Running was fun again.  I inquired the gap at each aid station, and did not seem to be gaining.  Then, a pit stop, a 2.5 minute detour (again to the wrong side of a creek chasing some deer trail), and another pit stop seemed to close the window.  The strong-running Mike never appeared ahead. 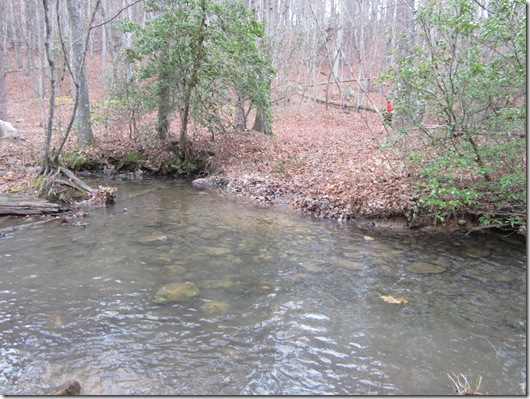 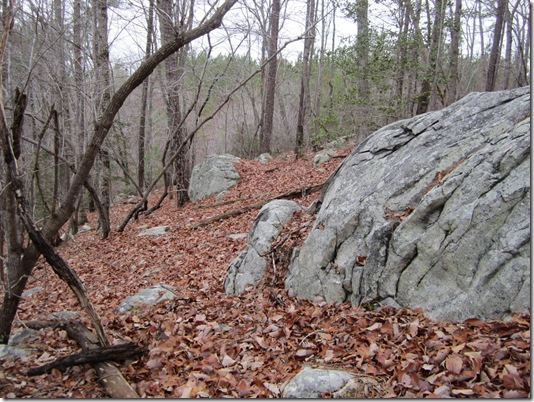 Can you spot the trail?

Nearing the end, I heard cheers as Mike crossed the finish line, victorious.  I finished less than 90 seconds later in 6:33:15, ~30 minutes and 1 place slower than hoped (climbing was somewhere between 6000-7500 ft, depending on garmin program).  Uwharrie definitely got the better of me this day.  Mike was elated to win, saying that this race had been his first ultra 9 years prior and he had unsuccessfully tried to win it 4 times.  He ran strong and it’s nice to see hard work pay off.  Shivering in the rain, we sipped some welcome chicken noodle soup provided by some of the many enthusiastic volunteers.  We were treated 20 minutes later to a photo-finish for 3rd/4th, with only a last second wipeout around the muddy final turn separating the two runners. 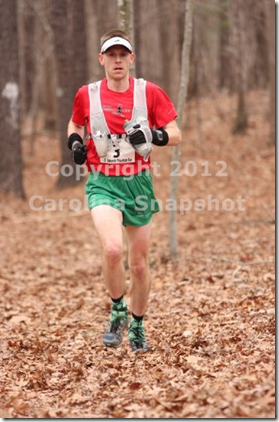 As for me, I enjoyed the race overall- it was good weather (for Feb), an awesome trail with plenty of challenges, good aid stations (that I generally skipped), and well-organized.  And it was a good workout for Umstead.  I didn’t run smart, though, going out too fast, and didn’t feel great.  It wasn’t the performance I wanted.  Fun race, but I’d give my personal performance a solid “Meh”.  I may be back- knowing the course would definitely be advantageous on this one and it was a race worth repeating, as the many 10+ year runners will tell you.