The Mind Over Mountain 15k is the second of five races in the Carolina Mtn Goat series and is the first race ever at the beautiful Jones Gap State Park.  The original course was scrapped due to excessive trail erosion and a more mild course was selected.  However, monster thunderstorms Friday night (2 inches of rain in 12 hours plus dozens of tornados, including 2 within 40 miles of the park) threatened to cancel the race.  Fortunately, the rain let up early Sat morning and the race was on.

I picked up Aaron and Barry for the hour drive.  After a pre-race briefing and shuttle to the start, we were off.  I was pretty determined to win no matter who showed up, and was equally determined to not get chicked by Amber Moran, a national-class mtn runner who won the first race in the series by 7 minutes over the first male.  Game on.

Jones Gap trails are occasionally smooth but generally technical, with an overabundance of rocks.  Especially the green, moss-covered type which are particularly fun to step on when wet.  Keep your eyes on the trail and don’t trust your footing.  Ever.  Add in lots of low-hanging branches (it’s not a trail run if you aren’t jumping and ducking at the same time), water crossings of all sizes, mud, and puddles and we had a true trail race.  No buffed out singletrack here.  The race was a lollipop route advertised as a 15k, was wheeled at 10.5 miles (including mile markers- awesome!), and was garmin-ed at 10.02 miles. 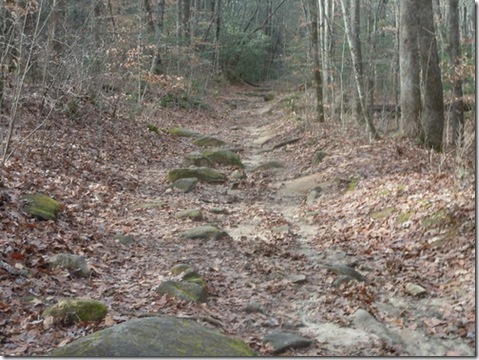 Average footing on the Jones Gap trail.  This was the easy part, and it wasn’t dry on race day.

Dave Workman started off quickly, followed by me and Amber.  We were working hard and breathing hard right from the start.  The well-marked Jones Gap trail climbs a steady 1200 ft in about 4.75 miles.  I trailed Dave the whole time, though he was never more than 15 seconds ahead, while Amber disappeared behind within 2 miles.  I generally felt good but both of us were definitely working hard- I’d call it harder than half-marathon effort.  We averaged about 8:20 miles up the technical trail.  The climb included a large log crossing of a river, aided by a rope the volunteers strung.  Turning onto the Tom Miller trail, Dave insisted on running up the real grunt of a climb (300 ft climb in under .25 mile) while I was content to mostly walk the steep steps to conserve energy.  He held a slight lead when we reached the only aid station at mile 5, but I caught up as my handheld allowed me to skip it.  We started the final ascent with Dave still ahead but breathing noticeably harder than I was.  He glanced back once with breathless words of encouragement, which I echoed to him. 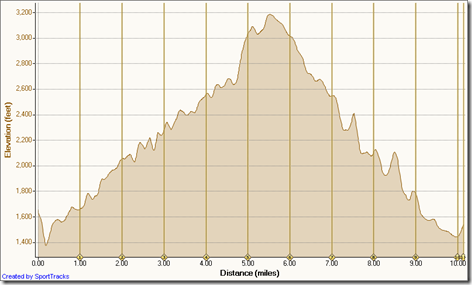 Not wanting the race to come down to the last mile on technical rocks and wary of the competition, I passed Dave just before the last summit and immediately kicked it up to 5k effort for as long as possible.  I wanted to get out of sight, so pushed down the terrain with abandon, slowed only by my watering eyes and the occasional deadfall tree.  Though pretty muddy, steep, and rocky, I was able really open it up and saw Dave slowly fall back (though still close enough that one small mistake would allow him back in).  The downhill was a blast, skipping over rocks (never trust the footing of green wet rocks… wait, all the rocks are green and wet), ducking branches, and splashing through multiple shin-deep creeks.  The trail finally moderated a bit in steepness (though not rocky-ness), allowing a brisk 6:23 for mile 9 (garmin instant pace said 4:30 pace for a while… don’t believe it).  Finished the 10 miles in 1:22:23 including 2200 ft climbing and descending.  Dave was 3 min back, Amber 1 min behind him, then a fairly steady flow of finishers. 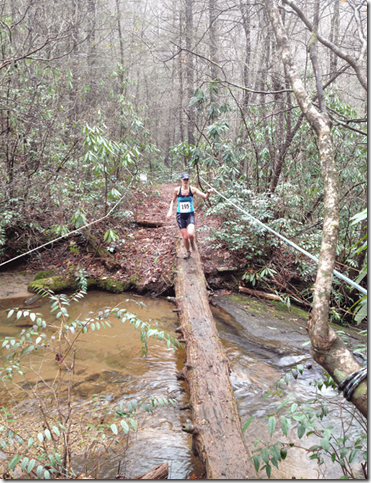 The finish line was enjoyable, chatting with the volunteers and the runners as they came in while munching on some food.  I won a mug as the King of the Mountain (their words, not mine).  The drive home with Aaron and Barry included the normal recounting of tales and saw us home by lunch.  A very fun trail race over a good course in the mountains- can’t beat that.