100 miles is a stinking long ways to run.  Every 100 miler is a lifetime of adventure- some good, some bad, always unpredictable.  Watching many runners throw down fast 100 mile times over the past few years, I decided to try to run a fast one myself.  Since most of my training is on rolling hills, not mountains, the nearby Umstead 100 seemed perfect.  A 12.5 mile, 8 lap course over crushed gravel paths with 8000 ft climbing, it has a reputation for being one of the fastest 100’s on the east coast.  My training went well and, other than a relative lack of long runs (Uwharrie 40 was my only run over 22 miles since Thanksgiving), I felt prepared.  That is, until I got sick a week before the race.  Hmm, not good- sick enough that a 3 mile run two days before the race wiped me out.  Being sick had already resulted in a poor Mountain Masochist and a DNS at Harbison, so I was thinking I might be snake bit.  I started feeling better the day before the race, fortunately.

My goal time was a pretty ambitious 14:40, and I knew there would be plenty of fast runners out there, including Mike Morton (13:18 100 mile in Jan and featured in this month’s Trail Runner magazine, which I read the night before- kinda cool), 4 time winner Serge Arbona, 2011 champ John Dennis, and fellow-UROC runner Troy Shellhamer.  My wife and kids came to cheer, stud-runner Justin Cole drove all the way from SC to crew and pace, and La Sportiva mountain goat Jason Bryant also generously volunteered to pace.

I stayed in a cabin near the start, falling to bed early but waking up at 2 am.  I eventually warmed up and made my way to the start in the middle of a drizzle.  A handful of runners quickly pulled away at the gun while I found myself running easy and chatting with Troy for the first hour, a nice way to pass the time.  He decided to slow down in hopes of a faster finish (a wise plan in a 100), while I sped up and spent time with/near Darian Smith and David Ploskonka.  Lap 1 was 1:39, right on schedule.  I was glad the drizzle continued on Laps 2 (1:37- a tad fast) and 3 (1:46- a tad slow) to keep the temps down, while my body adjusted to the reality of what I was doing to it.  Justin and my family showed up during here and were great motivation, with Justin getting me in and out of the aid stations in record time.  My only issues were some very painful hips and a sore ankle (neither of which had been bothering me in training).  I also enjoyed lapping and talking to various runners while being amazed how far ahead Mike and a few others were.  Lap 4, however, was rather terrible.  I started to heat up as the sun emerged, and just felt generally crappy.  Deciding that I hated 100 mile races, I concluded that I didn’t want to feel like this for 50 more miles, especially as I trudged up some of the steeper-than-expected hills.  My sickness provided the perfect excuse to drop out at mile 50, but in reality I was just a wus (not to be confused with a WUS).  I had run in 4th/5th place all race but was now passed by a very strong looking Mark Manz and Jim Sweeney.  In addition, my stomach was not happy with something and I began visiting the bathroom every 3-5 miles.  Ugh.  Time to quit.  My 1:59 lap 4 was a full minute per mile slower than planned.  I had already set my 50k (4:06) and 50 mile (7:03) PR’s (due more to the difficulty of previous races than my speed at Umstead) and wanted to call it a day. 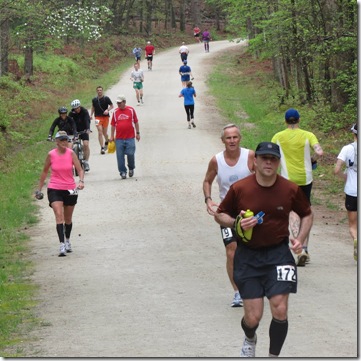 Green shorts are visible from a long ways away… 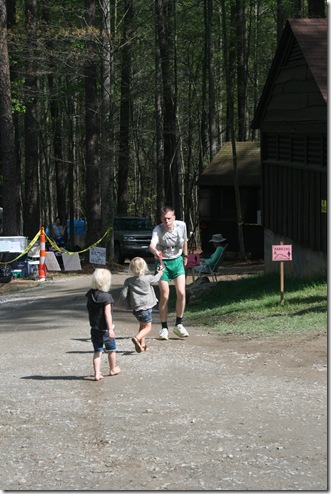 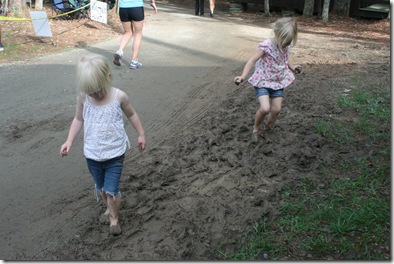 The kids taking my food and keeping busy in the mud

Unfortunately, as soon as I turned the corner at 50 miles towards my crew, Jason excitedly took off his warmups and started jumping around.  I just couldn’t bring myself to tell everyone I was quitting.  I stopped by the main aid station for some ultra-style “pick me ups” (Pepsi and chicken noodle soup), ran to my crew and said something to the effect of, “I’ve been planning to quit for 10 miles now, but I’m not.  I'm going to keep running.  Let’s go.”  With that, we were off.  I still felt terrible, but Jason did a great job of being patient and encouraging me while distracting me with innumerable great stories.  At a minimum, I figure I’d do one lap and set my 100k PR (which I did- 9:02).  Pacers can mule at Umstead, so he also carried my gu flask and refilled my water bottle so I could run through every aid station.  In theory.  In truth, it meant I could head straight for the bathroom.  Annoying.  The humid 80-deg temps weren’t helping, either.  Anyways, it’s amazing how much better you feel when you have someone to distract you from your misery, and Jason was great company.  Lap 5 and 6 were a disheartening 2:04 and 2:08 (still 12 minutes/lap slow), but I was still in 7th place, running most of the miles, and never again thought of quitting.  I even passed Chris Ramsey, which was a nice feeling.  Jason bowed out at mile 75 and Justin took over pacing.  Trying to shed weight, I somehow convinced him to carry my Nathan vest, then my sweaty shirt and hat, and eventually even my water bottle.  Pacers can’t be much more dedicated than that… and I’m not sure how his sense of smell survived the stench. 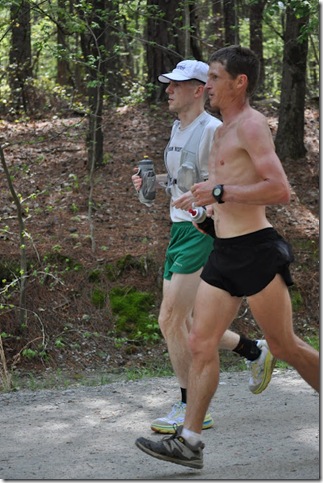 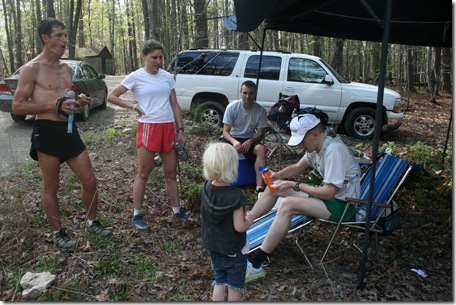 My crew/pacers of Jason and Alison Bryant, Justin Cole… and my helpful kids

My race finally turned for the better at mile 80.  I came out of the bathroom and was surprised to see Troy just yards away- he had made up a 3 mile gap.  Determined to give him a race, I took off running, appreciative for the falling temperatures and finally feeling energetic.  4 miles later, we passed a sick and struggling Serge at almost the same time that Mike Morton finally lapped me.  Mike ran a tough, impressive race- congrats to him.  We finished lap 7 in 2:01, and I gave Marci a kiss, telling her we were almost done.  Troy was only a mile behind, so we kept pushing hard as the sun set.  It’s a great feeling to know the end is approaching and that this is the last time you’ll see everything.  I kept reminiscing about my favorite and least favorite parts of the course to Justin.  Justin kept the pace honest while I counted down the miles and tenth of miles, enjoying myself while making sure no headlamps were gaining on us.  Lap 8 finished in 2:01 as I ran up the last hill and jumped to hit the Umstead sign for a 15:19:53 100 mile, a 4 hr PR.  Troy finished 8 min back, with Chris 8 min more behind.  I thought I had taken 5th place, but it turns out John Dennis’ DNF moved me into 4th.  I’ll take it.  After some food and chat, we headed to the hotel for a restless night of sleep.

Overall, I’d highly recommend Umstead for beginners or as a fast 100- it’s well run, predictable, a nice running surface, and has lots of company on the trail.  I have to thank Marci and my kids for their support during my training and during the race (still not sure how Marci kept the kids busy all day), and also Justin and Jason for being the most awesome crew/pacers.  They really pulled me along during the rough patches and I owe the finish to them.  Just like in life, we runners could not finish with all the work of RD’s, volunteers, friends, and family.  Thanks, everyone.  Now go run!