I started ultrarunning in 2008, which is not that long ago. But even in that short time, I have seen some drastic changes in ultras, especially the non-running side of the sport. Today, I want to share a few thoughts about two things that, for me, have revolutionized ultrarunning- Twitter and ultrasignup.

As any gray beard ultrarunner will tell you, it used to be that you had to wait until Ultrarunning magazine arrived to find out recent race results, and “recent” was highly subjective since the results were often a few months old by that point. The advent of the internet obviously made results available much sooner post-race. But, it wasn’t until Twitter came along that we could regularly follow races as they happened. All of sudden, spectators along the course could tweet what was happening at each aid station, either updating followers on the race leaders or on a particular runner of interest. On top of starting THE ultrarunning website, Bryon Powell of iRunFar turned race tweeting into a finely tuned machine, travelling to big races across the globe and outfitting himself with satellite uplink, all in the name of informing curious minds with live race results no matter how remote the race. I saw Bryon in action at UROC last year, and his dedication and skill were evident. He even kindly passed along a message to my wife who had just given birth the week before, telling her I loved her and the kids. Just a few minutes later, she saw the message on our home computer. Not too shabby, supposing we were hundreds of miles apart and I was in the middle of a 9 hour race. Bryon’s message on my behalf…
Showing how big of an ultra-freak I am, I will admit to spending far too much time some weekends endlessly hitting refresh on twitter, yearning to know what is happening at some race in Utah, Virginia, Europe, Colorado, California, or any other number of locales. Bryon and many other faithful runners have kept me informed. I’ll admit that I’ve even called my neighbor, another runner, near the end of Western States:
“Are you watching this?” [I didn’t even need to tell him what this was] “Yeah- it’s amazing.” “What just happened with Killian? Is that a typo?” “I don’t know. And look at Geoff- he was 20 minutes behind Tony and now he’s only 8 back” “iRF said he’s got Mackey as a pacer, so that’s gotta help.” And so on…
Much to my wife’s chagrin, it seems there is a race almost every weekend that I want to hear about. This year, I think I’m going fastpacking in the Smokies during WS100 just so I won’t spend all day on twitter. Who am I kidding, though, I’ll just read all of it when I get home.

The other revolutionary item is Ultrasignup. On the surface, ultrasignup.com appears no different than any other race signup website like active.com. But, search for a race and you’ll soon encounter a slew of useful data- race results for previous years, the top 10 times ever, how full the race is for next year, etc. But what makes the site really standout is the runner ranking. For every race, each runner is given a ranking based on their finishing time, with the winner receiving a 100%, and someone running double the winning time earning a 50% score. Ultrasignup averages all your result percentages to end up with your Ultrasignup ranking. Any ultrarunner who doesn’t know what their score is (at least approximately) is either lying or living in the backwoods of Alaska.  Ok, that may be a bit of an overstatement, but still- I know running buddies who constantly tease each other about who has a higher score after their most recent race, and I’m sure some people have DNF-ed races just so a low placing won’t appear on their permanent ranking. And having the ability to look at the ultrasignup ranking for all the entrants in your upcoming race is yet another online death trap, resulting in far too much time spent looking at who your real competition is at the next race and who has a high score just by winning a local 50k that only had 6 entrants. Irregardless, the information available on races and especially runners on ultrasignup.com is awesome. 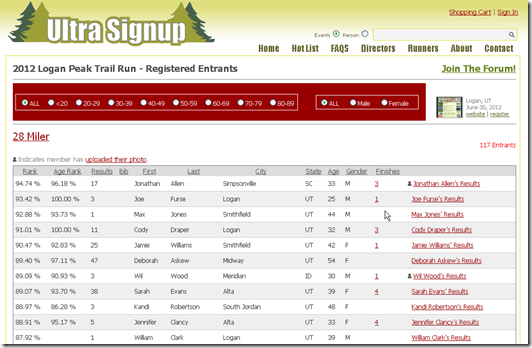 The entrants at my next race
And so, I’d like to tip my hat and give a big thank you to Twitter, iRF, all the other ultrarunning tweeters out there, and ultrasignup.com. Thanks, guys, for all you do to keep us informed about and during races. Though I suggest staying away from many ultrarunning widows, who may have a few choice words for making an already-time-consuming sport that much more time-consuming. See you at the next race!
Posted by Jon Allen at 1:20 PM